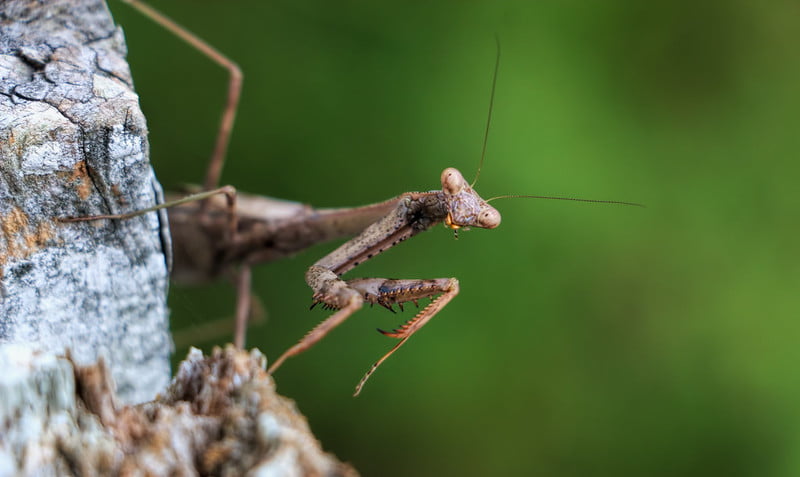 The praying mantis is considered as one of the most frightening insects on the world: it is armed with very powerful forelegs which it uses to capture unwary insects, arachnids and even (though rarely) amphibians or reptiles.

Even, as new research reveals, praying mantises are also capable of capturing birds, with the praying mantis being such a powerful predator insect, capable of attacking animals much larger in size than itself, the question arises, can a dangerous mantis attack and injure a human being?

The mantis is carnivorous. It is only committed to eating live insects. These live insects are nutritious and are fresh, which makes them a safe food for the mantis.

The prey depends on the type and size of the mantis, so even though the mantis can attack prey much larger than itself, it is unthinkable to place humans among its attacking prey.

Mantises usually eat flies, moths and small reptiles such as insects and lizards. On the other hand, when it is a large mantis, it can hunt large birds and insects.

Are praying mantises poisonous or dangerous to humans or pets?

This applies to both humans and animals. However, the mantis has small, pointed sprouts on its front tentacles with which it can hold insects when hunting. At least it can endanger its food.

Praying mantises do not have a stinger and cannot sting anyone with it. Even pets don’t need to be afraid of this insect. Praying mantises are not poisonous, nor do they bite cats or dogs. But if they can hold on tightly, they certainly know how to defend themselves in small ways. At least until they can successfully escape.

Basic facts about the Praying Mantis

The main reason why praying mantises are considered dangerous is because they are very rare to see. In your own garden or outdoors you rarely encounter these small insects.

Because of this, almost no normal person knows or has ever seen a praying mantis up close. This leads again and again to misjudgments and the mistaken belief that they are animals that would harm a person.

Many kinds of insects among their defense mechanism include spraying with acid, a very strong chemical reaction they store in their bodies to defend themselves from all kinds of predators, especially larger ones.

They achieve this thanks to the color of their body which in some cases is identical to the foliage of the plants in the habitat, in others it is very similar to the flowers or the bark of the trees.

Some mantises, besides having a color that helps them to hide, also have a physiognomy that makes it easier for them to blend in.

When the Praying Mantis is confronted and has no option to camouflage or run away then it uses a defensive system based on intimidation, adopting defensive postures that simulate the attack.

A threatened mantis in a defensive position extends its legs and shakes them to appear larger, but is unable to spit or spray with acid, in reality, to attack only has its legs and jaws, lack some chemical element that gives it a greater defensive advantage.

The misconception that praying mantises are dangerous or poisonous is due to the threatening attitude they project. As soon as you approach the animal, even with your little finger, it adopts a threatening pose.

If you do nothing else, the mantis will run away. But anyone who tries to touch the praying mantis can be pinched by it. Of course, she doesn’t want to hurt you with that, it’s just a defense mechanism.

However, an attack by a praying mantis very rarely happens. The mantis will always be eager to run away and retreat. They are too afraid to bite the fingers or hand that approaches them.

While it may seem threatening to some when the mantis lifts its tentacles, this position has little to do with aggression. It is exclusively a gesture of threat and defense.

In fact, I remember that in my adolescence I practiced several martial arts including Kung Fu, as everyone knows, kung fu adopts animal positions as a fighting style, in kung fu, the mantis style is essentially a defensive rather than offensive style.

Instead of simply touching a praying mantis, come into contact with a little more care. So you can let the mantis climb into the palm of your hand without any problems. Then you can examine it in peace.

There is no need to be afraid, praying mantises are delicate and easily vulnerable. They also have a passive nature.

Although the praying mantis is harmless to humans, it should not be addressed just like that. After all, this stresses the mantis immensely and can even cause it to attack with defensive intent. In addition, praying mantises can die from excessive stress. Therefore, it is not necessarily appropriate to pick up specimens in the wild.

The front legs are the most distinctive feature of the praying mantis insect.

These limbs have evolved into perfect appendages for hunting, which is why they are one of the parts of the praying mantis most studied by entomologists who call them raptorial legs.

These have some thorns that work as hooks, so when the mantis closes its forearm the prey has no possibility of escape.

How dangerous can a praying mantis be to a human?

When looking at the praying mantis, many people wonder if they can be bitten or perhaps pinched. It is often heard that praying mantises are poisonous. It is also said that the spike in the tentacles causes excruciating pain when placed in the soft tissue of a finger. But is that true and how should you protect yourself if necessary?

As a rule, a praying manti should not be considered dangerous to humans. When they notice the presence of people they tend to disappear soon or camouflage themselves well enough. If there is direct contact, it is unlikely that a praying mantis will bite a person. Defense with the help of fangs is always more likely.

Praying mantises are absolutely non-toxic and have a passive nature. As long as possible, they will try to escape or hide and hope for the best. So you shouldn’t be too afraid of these insects. They cannot and will not become really dangerous to humans. However, this does not always apply to humans.

If you approach these delicate insects carelessly or abruptly, there is a very high risk that you will hurt them. Great caution is required when handling praying mantises.

This is especially true for terrarium owners who want to pick up their mantises. Even tame animals are not objects that should be passed on completely to the circle of friends.

If it does “snap”, a soft child’s finger can bleed a little. In adults, however, the skin is already too thick for this. You usually only feel a small tweak. And no, no poison is pumped into your own bloodstream. Nevertheless, you should thoroughly disinfect the area. Safe is safe after all.

How tall is a full-grown praying mantis?

An adult praying mantis is approximately six to seven centimeters in height. Certainly, the female is bigger than the male, both in length and in body size. Males are slimmer and thinner than females. Then there are the long antennae and she can stretch her tentacles.

The Praying Mantis has a very special jump that it uses frequently while hunting, praying mantises jump exactly to their destination with rotating limbs.

Before they take off, the insects take a step back and pull their abdomen in so that the tip points forward. When jumping, they gain momentum by moving their abdomen up and down, rotating their front legs counter-clockwise, and pushing themselves off the ground with their hind legs.

The focus of the insect’s body is always on its elongated body axis. So they reach an initial speed of over one meter per second. Once in the air, the hind legs also begin to rotate, but unlike the front legs, clockwise. The abdomen also rotates slowly clockwise at first, but later changes its direction.