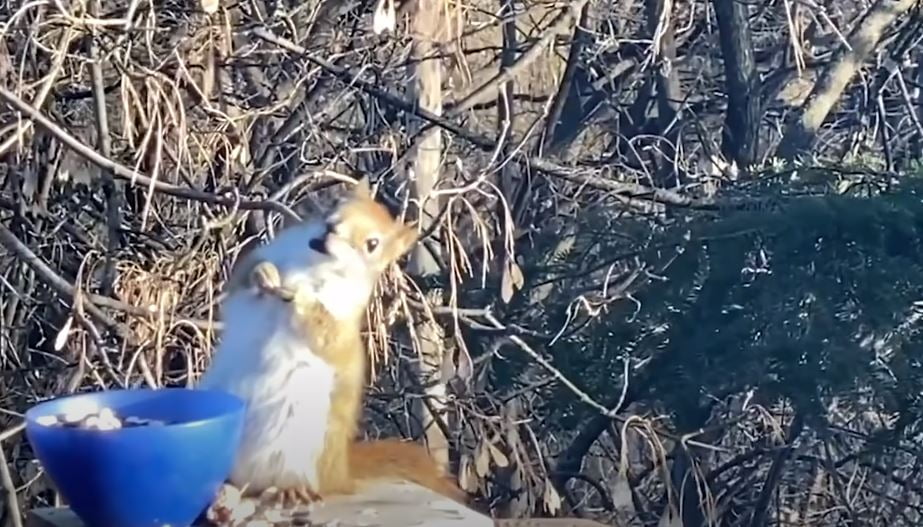 A squirrel can get drunk or intoxicated by eating a considerable amount of fermented fruit, this is an involuntary act, since to the squirrel’s palate it is only eating fruit, but when the alcohol produced by the fermentation of the fruit enters its organism, causes the intoxication.

This topic became interesting and funny due to a video of a squirrel showing signs of drunkenness after accidentally eating fermented pear.

It is not that squirrels like to be drunk or love alcohol per se, the intoxication from ingesting fermented fruit in the case of squirrels is accidental.

Although there are theories of other animals that like to ingest fermented fruits deliberately, either for pleasure or entertainment, although this has not been proven with valid arguments.

Why does a squirrel get drunk when eating a fruit?

This occurs due to fermentation in the fruit, alcoholic fermentation takes place everywhere in nature. If fruit lies in a warm environment for a long time, the bacteria and yeasts multiply on the surface. The microorganisms penetrate the surface of the ripe fruit and get inside.

Oxygen starvation can occur during the decomposition process. Then the yeasts working there switch their metabolism to alcoholic fermentation. The result is that the spoiling fruits contain alcohol.

Can the squirrel eat pears?

Although not part of their normal diet, squirrels can eat pears in moderation, it is not recommended that a squirrel eat pears on a daily basis or in excessive amounts, due to the high sugar content of the fruit.

It is also unhealthy for the squirrel if the pear is overripe, as it could be in a state of fermentation which can cause intoxication.

A pear can contain up to 10 g of sugar, which is a considerable amount of sugar, especially in fermentation. The amount of alcohol produced in a pear can immediately affect a squirrel that usually averages 300 grams in weight.

Do squirrels get drunk on pumpkins?

Not only does fermentation of the pumpkin produce intoxication in a squirrel, but an overripe pumpkin can also have considerable amounts of Cucurbitacin which can produce physical problems in the squirrel.

Is there any other reason why a squirrel looks drunk?

The fact that a squirrel behaves abnormally or walks in an unbalanced manner does not necessarily mean that it is drunk.

A squirrel may move abnormally for a variety of reasons:

The squirrel is not the only animal that can get drunk

Animals love the sweet fruits that ripen on trees and bushes, but these ripe fruits are sometimes in a state of fermentation and once in the animal’s stomach they are transformed into alcohol which causes intoxication.

Badgers are omnivores. They cannot resist ripe summer fruits such as cherries, currants, gooseberries or plums. It is the same for all animal fruit lovers, intoxicating times are ahead of them.

Elk, for example, prefer ripe, lightly fermented apples. Dealing with them is then just as strenuous as with completely drunk people: the deer riot, roar and stumble.

In order not to fall over, the mighty animals, weighing up to 800 kilograms, then lean against trees.

Cases are also known of pigs, which have been fed a mixture of yogurt, milk and juice, which squeal happily and their behavior suggests that they are drunk, and which sober up a few days later.

Many birds also get drunk after eating ripe grapes, and may even lose their lives by flying erratically and crashing into other objects.

Hedgehogs often get drunk unintentionally, when hobby gardeners set beer traps to hunt snails, the spiny animals happily eat the snails that have been pickled in beer. Then their movements are so erratic that they can’t even keep their balance.

Elephants, monkeys and other animals are also known to become intoxicated by ingesting fermented fruits.

Some animals are immune to alcohol

Berry-eating birds, such as starlings, blackbirds and field thrushes, are naturally immune to alcohol intoxication, Starlings can even tolerate much more alcohol than humans.

If a starling were the weight of a human, it could drink a bottle of wine every eight minutes without getting drunk.