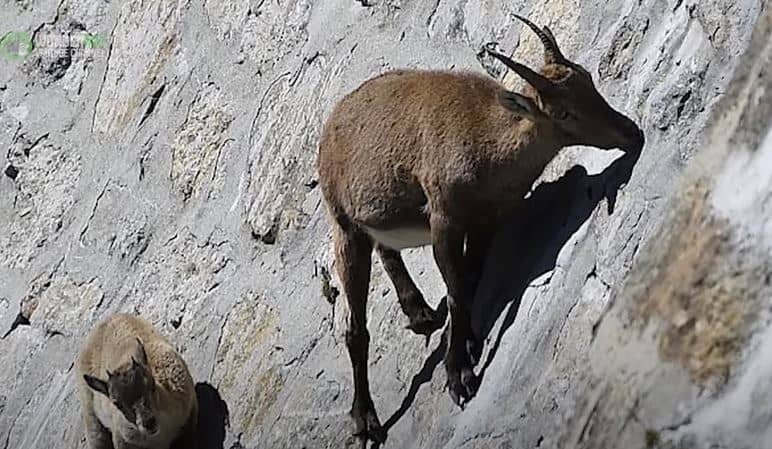 Have you ever noticed that goats in the wild while climbing rocks on a hillside tend to lick it? Well, mountain goats simply lick the surface of the rocks in search of salt, because their plant-based diet does not provide these animals with the sodium-containing salt that their bodies need.

Along with forage and water, salt is one of the most essential components of a ruminant’s species-appropriate diet. Although herbivores can manage their salt reserves well, in the case of sheep and goats an additional salt supply is necessary, depending on the level of performance.

Herbivores tend to migrate in the wild until they find a salt spot. As this may be difficult, the mineral and trace element content can be supplied by salt licks.

When it comes to salts, goats do not experience any possible oversupply because they know when they have consumed enough salt.

Livestock or table salt (NaCl = sodium chloride) consists of the elements sodium and chlorine. Both belong to the so-called quantitative elements and, together with other minerals, are essential for important body functions.

The need for minerals is decisively influenced by body weight, gestation or lactation phase and performance (growth, milk production, etc.). Some of the elements are usually available in sufficient quantities with free feeding on pasture, but salt is a mineral that is not found in pasture.

Why is salt so important for the goat?

The sodium contained in salt is an important component of the goat’s body fluids and is therefore important for the absorption and excretion of nutrients.

Sodium has a decisive influence on nerve functions and muscle contraction in the goat. It is found in the body mainly in the saliva (buffer function), in the blood serum and in the muscles.

Chlorine is contained in the blood and is necessary for digestion in the abomasum of ruminants. There it forms part of hydrochloric acid. In metabolism, chlorine accompanies sodium and potassium.

Goats risk their lives in search of salt

Have you seen how high goats can climb to lick rocks?, is simply amazing and at the same time frightening, goats climb great heights just to find a little salt, goats are excellent climbers, they can climb steep and smooth walls of dams hundreds of meters high, and mountains, risking their lives just to lick a little salt.

That’s how vital salt is to goats, it’s a matter of life and death for them, Goat nerves, muscles and metabolism depend on sodium, as well as other minerals and trace elements, to function. Luckily, nature endowed goats with exceptional climbing skills, although sometimes things don’t always work out.

Salt can be difficult to obtain for ruminant animals

In a way, the need for salt is a problem for herbivores, because while carnivorous animals obtain their salt content through blood and meat, vegetarians lack this practical basis.

If animal species find too little salt in nature, wild and grazing animals, in particular, go in search of salt springs or mineral-rich rocks in their surroundings.

The supply of natural salt from direct nature is increasingly lacking, the reason for this lies in the increasing agricultural use of arable land with corn or rapeseed. In the past, on the other hand, wild grass meadows with a high sodium content could be found.

Nature took care of this, lack of salt does not pose an immediate threat to life, but it means a weak immune system, frequent infections or joint, bone and muscle problems for the animals.

Especially the annual periods of animal species with offspring mean a shortage, especially for the already weakened mothers.

Are goats attracted to pee?

Mountain goats can be attracted to human urine and this is understandable, as human urine contains mineral salts such as sodium which is so valuable to goats.

Normal urine contains 95% water, 2% mineral salts and 3% urea and uric acid, and approximately 20 g (grams) of urea per liter, among the composition of urine are sodium, potassium, calcium, magnesium and chloride.

All these minerals are very valuable for a goat.

What other animals in nature need to lick salt?

Horses, cows, goats, sheep, wild boars, and deer or hares, all these animals need a constant source of salt, which they constantly seek when they are in the wild.

Sometimes these animals found in forests are attracted by salt deposits located many kilometers away from their original position, for this reason, many foresters and hunters install small salt mines with the intention that the animals do not move away from the territory, and also to attract other animals to the area.

Why do farmers find it necessary to give salt to animals for licking?

The animals do not lick the stone directly, often, the salt lickshed is tied to a higher branch or tree stump. When it rains, the salt drips onto the ground, from which the animals can help themselves, as some of the animals cannot control their salt needs, an excess of salt may be produced.

Domestic cattle also have a great need for sodium, especially cows. They need up to 50 grams of sodium per day, depending on whether they are young animals, dairy cows or beef cattle.

Let’s continue with the dairy cow example for a moment: the cow loses half a gram of sodium for a single liter of milk produced. The standard daily feed already contains a few grams of sodium chloride. But most of the time this does not even come close to covering the daily requirement.

For this reason, farmers hang additional salt licks in the barn and in the pasture. They are usually shaped so that a small rope can be inserted through the stone, which is attached to the fence or near the trough.

Cows lick it when they feel a sodium deficiency, which incidentally is the only deficiency the animals actively try to compensate for.