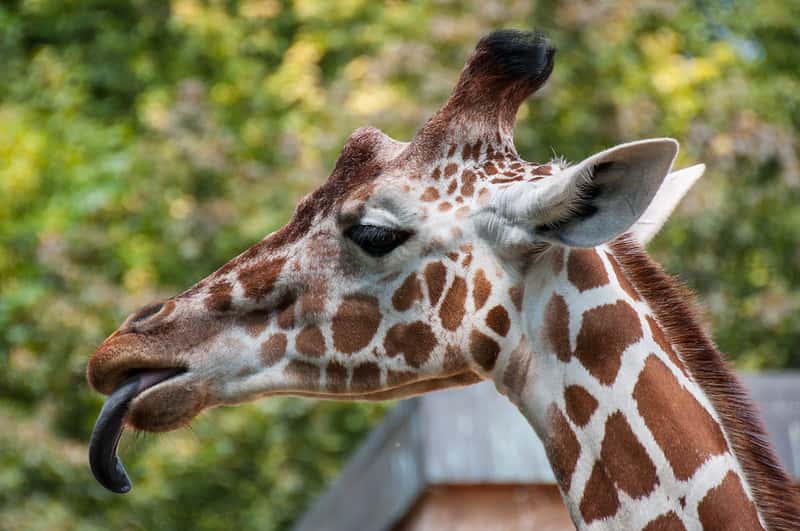 The Giraffe tongue has surprising and distinctive characteristics, it is a prodigy of evolutionary design. Its shape, color, texture and length are ideal for fulfilling the goal that nature has given it: to lick the leaves of acacias in search of food.

These leaves are protected by defenses in the form of very sharp thorns. The great length of the animal’s tongue allows it to reach the last fresh green leaves (which are usually in the highest and most inaccessible areas of the tree) by avoiding the thorns.

But it seems clear that such an endeavor cannot succeed one hundred percent of the time. There are always accidents, miscalculations, unforeseen events that lead to the dreaded puncture.

For those cases, the giraffe’s tongue also has protection, a hard and wide skin covered with large amounts of antiseptic saliva. If a wound occurs, the tongue tries to repair itself.

But what about its color? Isn’t that really strange?

For this, science has also found an answer. Giraffes feed on small portions of nutrients through the tiny acacia leaves. Shot by shot they have to get enough calories to nourish their gigantic body.

That forces them to spend at least 12 hours a day just eating.

Could you imagine 12 hours with your tongue out of your mouth, in the sun of the savannah, the grasslands or the open woods where they live?

The ultraviolet radiation received in a day is enough to kill off any soft tissue that gets in the way. The dark color, produced by large doses of melanin in the skin, is the best safeguard against this possible damage.

Why is the Giraffe’s tongue blue?

As explained previously, the giraffe’s tongue is exposed to the sun for a long period of time. Giraffes spend a lot of time using their tongues to obtain food which is found in the treetops, often among the thorns, like the acacia.

Since their tongues are about 50 centimeters long, there is a lot of margin for sunburn, just like humans.

The deep dark color protects against sunburn and can protect against it. The darker color is the result of the extra melanin present in the tongue of the giraffe.

The end of the giraffe’s tongue tends to be darker and may be more pink or even purple near the base because that part is not as heavily exposed to the sun.

The melanin acts as a kind of sunblock. Just like people with darker pigments, although they can be affected by the sun, they are less susceptible to sunburn.

The giraffe’s tongue is strong enough to be able to wrap large branches and pull them out. It is resistant, which helps it to break thick thorns. And it’s handy, so much so that he uses it to clean his ears and hear better.

In addition to the dark blue color of the giraffe’s tongue protecting it from sunburn, it also protects the giraffe from other physical damage.

African acacia trees and shrubs are very thorny, but with the help of its tongue, the giraffe manages to hold the leaves without getting hurt, since such prehensile muscle is provided with small papillae just like the mouth, which helps to cushion the sharp elements of trees and shrubs.

Similarly, its thick, sticky saliva covers the thorns that could be swallowed, so that they are not in danger of damaging any internal organ in your body.

The giraffe’s tongue is not poisonous, on the contrary, its tongue produces antiseptic saliva that protects it from physical injuries and poisonous chemicals found in the thorns of acacia branches, branches that are a fundamental part of the giraffe’s diet.

Examples of other animals that have Bluish tongue

There is another animal that shares many similarities with the giraffe, including the dark blue color of its tongue, it is the Okapi.

Okapi is considered to be the oldest surviving mammals on Earth and originate from the Democratic Republic of Congo, where habitat loss and poaching have contributed to the reduction of their population.

Also known as the forest giraffe, this species can weigh between 200 and 300 kilos and reach a length of two meters.

It is considered a living fossil, because of its resemblance to the first giraffes that appeared in the Miocene period 23 million years ago, when the Pyrenees, the Alps and the Himalayas were still in formation.

At first glance, it looks like a cross between a zebra and a giraffe. Although if there is one thing that attracts the attention it is its long blue tongue, with which it manages to clean its ears.

Thanks to its tongue, it can reach the highest branches to eat as well as the giraffe. But this is something difficult to see because they are very elusive animals that tend to hide in the half-light of the bushes. So if you ever see one, consider yourself lucky.

Chow chows are characterized by a rare bluish-black, purple or pink-stained tongue and sturdy legs. The blue-black/purple or pink and blue spotted tongue is usually dominant in this breed of Chow Chow.

Tiliqua scincoides is a reptile that inhabits the savannahs and semi-desert regions of Australia and Tasmania. Its physiognomy is also extendable to the rest of the subspecies.

Thus, they show robust bodies of smooth and shiny scales with very short and delicate extremities and a wide, powerful and triangular head.

Although undoubtedly its most identifying feature is the intense blue tongue, present in all subspecies of this type of scintillating. The black bear (Ursus americanus) is a species of carnivorous mammal of the family Ursides. It is the most common bear in North America.

Their weight depends on the age, the sex of the animal and the season: in autumn, the black bear gets fat and accumulates fat reserves in order to spend the winter.