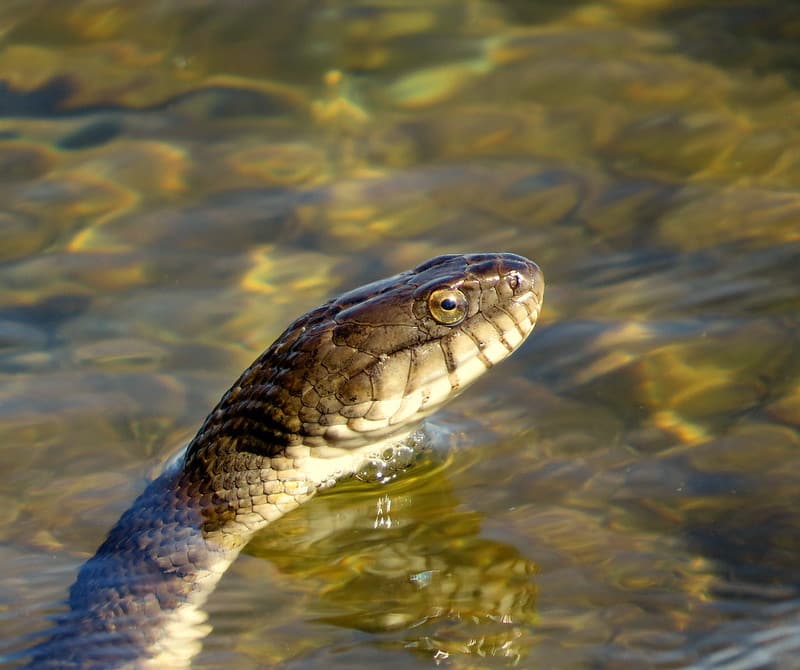 Can a snake be drowned?

Snakes are mysterious animals, and although we know that they can be both terrestrial and aquatic because of their fish-like appearance to some extent, the question arises whether snakes can now.

Snakes are lung-breathing animals, so theoretically yes, they can drown, but that doesn’t mean they can drown easily, there are several species of snakes, and they can all stay underwater for a long period of time.

Some species of snake can stay underwater for a surprising amount of time, it’s practically as if they can breathe underwater, which is due to the snake’s amazing physiological adaptations.

Snakes can “take a breath” from time to time…

Snakes have nostrils, do you know what this means? yes, snakes breathe and therefore can drown (checkmate), in fact, the main function of the nostrils in the snake is breathing, as it is well known that snakes use their tongues to sniff.

How long can a snake stay underwater?

There are many species of snakes, it is still not known precisely how long certain species can stay underwater. Depending on the species, a snake’s immersion time in the water should be between 10 and 30 minutes.

For example, the viperine snake, or water snake, can be submerged in the water for 15 or even 20 minutes. There it catches a large part of its food, which is mainly made up of tadpoles, newts, small fish, frogs and toads, a diet that is completed with earthworms.

But sea snakes have also been observed staying underwater for up to eight hours. Researchers cannot explain such a long dive time simply by the enormous lungs.

Some species of sea snakes can also dive very deep: There is talk of 180 meters, but this claim has not been scientifically proven. It is based only on examinations of the stomach contents of the searched snakes.

How can a snake last so long underwater?

Through studies it has been determined that a type of sea snake, the Hydrophis cyanocinctus, uses an extensive vascular system at the top of its head to extract oxygen from the water and thus hold out longer during the dive.

The Hydrophis cyanocinctus or blue-banded sea snake is a highly venomous marine reptile that can be found near the coast and on coral reefs located in the tropical waters of South Asia and the Persian Gulf.

This sea snake uses the top of its head as a gill to breathe underwater.

While the modified cephalic vascular network is structurally very different from the gills of fish and amphibians, its function is quite similar, providing a large surface area filled with oxygen-depleted blood vessels that can efficiently absorb oxygen from the surrounding water.

The fact that normal snake species have the ability to last a long amount of time immersed in water is due to their physiology.

Snakes have a very long lung, which extends over almost their entire body, so they are able to store a lot of oxygen; furthermore, they considerably reduce their metabolism during the dive. And there are species that have the capacity, when diving, to resort to anaerobic metabolic pathways to obtain ATP.

If you’re one of those people who are afraid to swim in lakes, rivers and the like for fear of snakes, here’s another reason to stay out of the water: all snakes can swim. Therefore, all snakes are technically “water snakes,” although only some receive that designation, usually because of their propensity to hang out near water.

Snakes swim by moving their body in lateral, wave-like movements, seeming to more or less shape their body into an S-shape. These ripples start from your head and continue through your body. This is the same type of body movement they will use when moving on very smooth surfaces.

Using the S-shaped movement that spreads through its body, the snake can exert a backward force against the water, which causes them to move forward.

Water snakes also use this method for swimming, but these types of snakes often have flatter sides than other snakes, allowing them to swim more efficiently using this movement on their rounded siblings.

Can snakes swim in a chlorine pool?

Rather, there could be cases where the snake accidentally falls into a pool, the chlorine in a pool does not significantly affect a snake, although in large quantities the chlorine can scare away the snakes due to its strong odor.

In fact, many people use a mixture of chlorine solution and water as snake repellent.

Do poisonous snakes swim over or underwater?

The poisonous snakes mostly swim underwater in search of food, eating fish, crustaceans, shrimp, eggs. Practically all species live their whole life in water: there they are born, grow, reproduce and die.

Their behavior, in general, is not aggressive, they usually bite humans when they are walking or diving in muddy waters, luckily in general sea snakes are shy and avoid humans, so they don’t usually bite much.

Poisonous water snakes do not tend to dive deeper than a few tens of meters, not only because they need to come out to breathe, but also mainly because they are reptiles, are cold-blooded animals, and require warm water and sunshine to keep their body heat and vital functions properly active.

Water snakes like the anaconda (Eunectes murinus) can detect with their whole body the sounds of animals moving underwater.

Aquatic snakes such as the anaconda, are able to detect the sounds of animals moving underwater with their entire bodies.

Snakes, although they have limitations in sensing air waves, are most effective at identifying ground or water vibrations. Most of the snakes can accurately sense the vibration created by the movements to the substrate of prey by supporting the lower jaw (which is in contact with the columns). Contents1 Why do spiders stay in corners?2 The corners are a very comfortable and safe place for spiders3 Corners are one of the spider’s favorite…