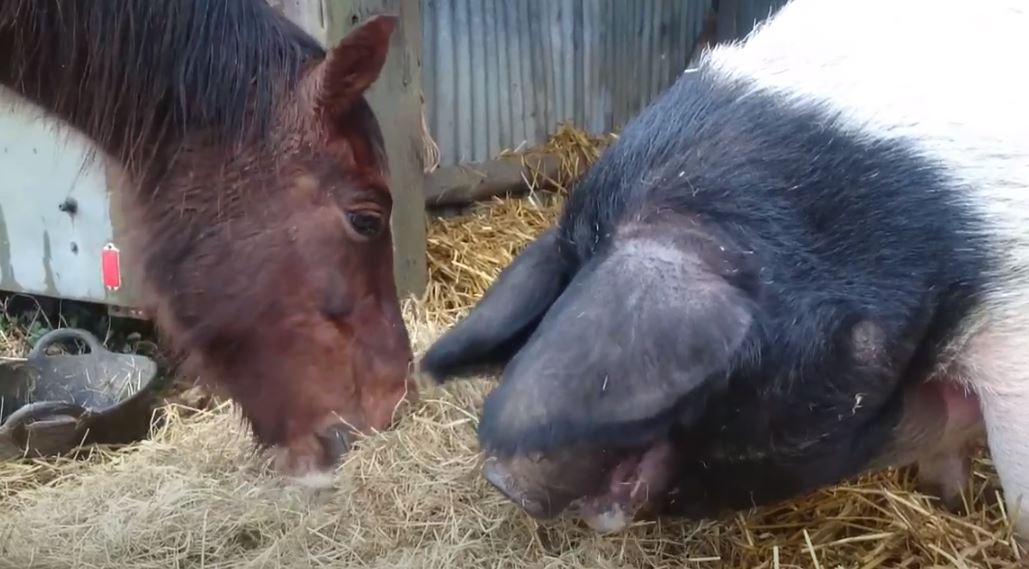 Pigs and Horses, two of the most common domesticated farm animals used today, and have been for centuries, but they really are a strange combination to see and are animals with characteristics as distinctive as the sea and the land.

If you have horses or pigs on a farm and you are thinking about whether it would be a good idea to put them together then in this topic I will outline some research points on the most important aspects to consider in order to have both animals together with as little trouble as possible.

Although there are many examples of pigs living together with horses in the same place, it may not be a very good idea to keep these animals close together on a farm, both biologically and temperamentally, pigs and horses have more incompatibilities than affinities.

This does not mean that it is not possible to keep them together, as I mentioned previously there are many examples of healthy coexistence between both species.

It all depends on some specific factors, the space where they are kept, if they are in direct contact or separated, the breed and the temperament of each one, as there are horses that are more temperamental than others.

So, here are some points to consider.

Horses have a very sensitive sense of smell

What does the horse’s sense of smell have to do with pigs? Well, I bet you have a pretty good idea.

Some farms keep pigs in rather sloppy conditions, and although many people claim that the stigma of pig odor is a myth, pigs can actually smell pretty bad quite easily.

Adult male pigs naturally develop compounds in their body fat called skatole and androstenone, which produce an odor that can be irritating no matter how clean the pig or farm is.

So, many of the testimonials that I have observed is that horses detest the strong smell of pigs, that may sound like an unsubstantiated comment but I don’t really doubt it.

Pigs can have a really irritating odor, I don’t want to add to the stigma that this animal has, but it is a reality that they are not “odor free”.

The horse has a big nose, and a very sensitive sense of smell, obviously not as sensitive as a dog’s, but sensitive enough to be irritated by an annoying odor.

The horse can detect the presence of water underground with its sense of smell, it may not seem like a super surprising fact, but I find it surprising that they have such a good sense of smell.

The horse can also differentiate between friend and foe animals through smell, this does not mean that a pig with a bad smell will be the horse’s enemy, but it will definitely make him irritated.

I am not a veterinary expert, but I cannot make a topic where I mention two animals of different species living together and not mention the possible transmission of diseases, that is something fundamental.

So, without being a veterinarian I can tell you, that since I can remember I have heard about salmonellosis, a bacterium characteristic of pigs, apparently it is something very common in pigs and the symptoms are somewhat difficult to recognize with the naked eye.

This bacterium can be transmitted from pigs to other livestock species, including horses. According to my research, Salmonellosis can cause diarrhea, chills and fever in horses, but not in all species.

In some species it can appear asymptomatic, this bacterium is spread through feces and water contamination, so it is not recommended to have pigs and horses living together carelessly in the same place.

Some species of horses can aggressively kick pigs

Yes, this is one of the biggest fears for anyone thinking of keeping pigs and horses together, and it is something that unfortunately could happen.

Physically, horses are far superior to pigs, it is obvious, and the most brutal and frequent form of attack by a horse is through kicks.

Generally, horses are tame in character and do not show explosive aggressiveness towards other animals, but as it happens in other animal species, horses depending on their species and training can have different types of temperament, including some with a very strong character.

Usually a horse is not an offensive animal that could easily attack other animals, but it is an animal that is always alert and reacts out of pure instinct.

There have already been many cases of horses kicking humans who try to touch their tails, pigs are very curious animals, they are used to nibble their tails and ears.

If by chance a pig inadvertently approaches a horse it could be kicked hard, just by instinct reaction.

Obviously some horses are much more nervous and aggressive than others, it is well known that thoroughbreds are more likely to have a strong character and be aggressive.

It is a typical habit of pigs to dig in the ground with their snout in search of food, this activity is called rooting, these excavations could be considerably deep as the pigs are sometimes trying to get to some roots that they could eat.

In case you have pigs and horses together in the same field this could be something unfavorable, especially to horses.

If the ground is a little loose, the pigs with their continuous digging will have all the ground full of holes.

It is possible that a horse has a bad step in one of those holes, it is really something relevant and another reason to keep both animals in separate grounds.

Which animals are the best companion for the horse?

You can have your horses and pigs together, you just have to take certain precautions, actually in the case of several animals the ideal would be to have them in separate spaces, although this will depend on your space possibilities.

Among the animals that can be good company with minimum problems for a horse are:

Donkeys and miniature horses: it is understandable, they are very similar to horses, they have the same feeding habits.

Chickens: the good old hen is a very economical and minimally invasive companion for a horse plus as good omnivores they are, they can eat the insects and parasites in the barn, thus creating a positive contribution.

Only with the hen should caution be taken with the excrement, as it could be harmful to a horse if accidentally ingested.

Goats and Sheep: Goats can be another suitable companion for horses, they are quite simple to feed and care for, with the exception of the fencing problem, there is no fencing that can contain goats.

Cows: they are totally peaceful and respect the space of other animals, their diet is similar to that of the horse based on grass, as with other animals.

Caution should be taken with some diseases, and also another negative point is that the cow usually attracts many flies, which are usually annoying to horses. Seeing a coyote may be much less common than hearing them at night; they are very stealthy animals in the daytime and could be quite…