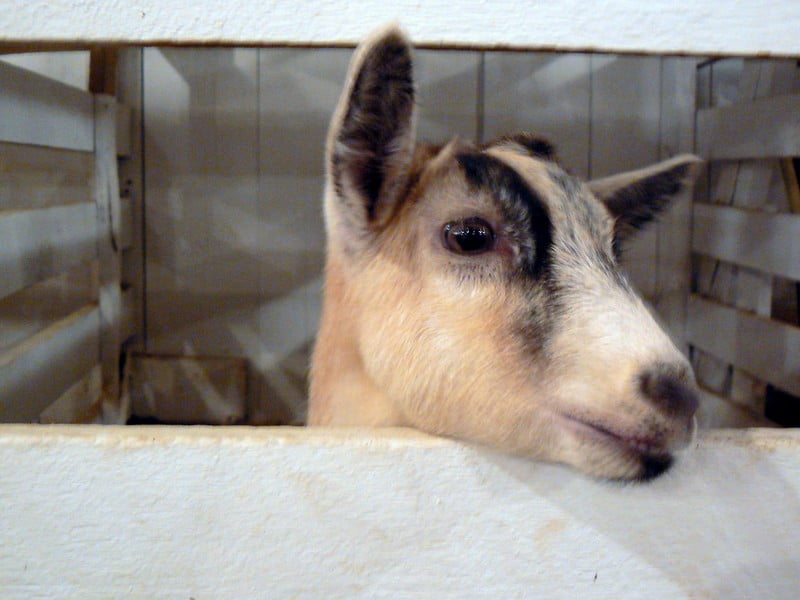 In the feeding of the pygmy goat, there are not really many complications, they are ruminant animals whose main food is grass and grains.

As these vegetables are not very nutritious in terms of vitamins and minerals, the pygmy goat is usually supplemented with vitamin and mineral supplements.

Therefore, the idea of feeding pygmy goats with a vegetable like kale seems to be the perfect combination.

This cabbage contains a great number of vitamins and minerals, and its texture in the form of crunchy and fibrous leaves would be easy for the pygmy goats to consume.

Kale is very popular and is recognized as a super food, it is found in smoothies, salads and various natural food products.

The health benefits of kale include enhancing eyesight, as well as combating cancer and other diseases. So it’s not surprising that many pet owners and breeders wonder if it’s safe to share some of these benefits to feed their animals and pets.

But, not all that shines is gold, and about the kale, there is the thought that it could be a toxic vegetable, due to the accumulation of thallium and other heavy metals in its composition.

So to answer the question of whether pygmy goats can eat Kale, the answer is Yes, they could digest it well, but it wouldn’t be a recommended feed in the long run, due to the heavy metal content in kale along with the susceptibility of small ruminants to kidney stones.

Is Kale Safe For pygmy goats?

I conducted a thorough investigation to determine what would be the problem for a pygmy goat to ingest kale.

One theory claims that the contaminated soil is to blame for the heavy minerals found in kale. Since kale grows in the soil, it simply absorbs contaminants from the soil.

Like other vegetables such as squash, broccoli and cauliflower, kale absorbs thallium, cesium, aluminum, nickel and arsenic from the soil.

Kale itself does not represent an immediate danger when consumed by a pygmy goat, the problem stems from the tendency of pygmy goats and other small ruminants to suffer from bladder stones.

Bladder stone is a problem that arises from the accumulation of mucus, proteins and minerals in the urinary tract. Kale contains large amounts of heavy metals, which in the long term would cause problems for the pygmy goat.

Phosphorus will be removed by a ruminant through saliva and later through feces . High grain diets with low forage levels will cause less production of saliva, so additional phosphorus needs to be eliminated from the body through the kidneys and then out of the urine.

When the diets contain high levels of phosphorus, the urine contains too much of it and the phosphorus will settle and solidify into pebble-like pellets that may be too large to pass.

Isothiocyanates, commonly found in kale and broccoli, as well as certain other leafy vegetables, have been linked to potential health risks in animals.

Ironically, this same substance is thought to be sort of a cancer-fighter in people. Isothiocyanates can be mildly to heavily irritating to the stomach of certain types of animals, and in high quantities, could be deadly.

Since both broccoli and kale contain relatively equal quantities of this compound, they are both considered safe for a pygmy goat only if the total quantity ingested is below 10 percent of its daily consumption and ideally not fed continuously.

If a pygmy goat has ingested over 25 percent of its intake, kale can become potentially toxic.

As a consequence, feeding small doses of kale for an occasional time is unlikely to hurt a pygmy goat.

What to do if your pygmy goat eats kale?

Although a small amount of kale is probably harmless to a pygmy goat. The size of the goat plays an important role in the type of response it has to human food such as kale.

In case of a prolonged intake of curly kale by a pygmy goat.

The first step is to carefully watch for signs of intestinal problems such as diarrhea or vomiting, as well as possible signs of kidney or bladder stones, which may involve difficulty in urinating or other problems with typical urination habits.

If you notice these symptoms, you should notify your veterinarian immediately.

Alternatives to kale for the pygmy goat

Kale is a super food from which any animal that consumes it could benefit greatly, leaving aside the possible contraindications, but what other vegetable alternatives exist besides kale?

Broccoli, Brussels sprouts or any other cruciferous of the same family are recommended for their great contribution of minerals and vitamins.

All these vegetables provide few calories, contain many vitamins C and K, as well as magnesium and calcium.

Why do Pomeranians dig? If you want to create a golf course full of holes in your yard or garden and you don’t know how… Reintroducing fighting gerbils What is wrong with gerbils? They look so tender and beautiful with their big oval eyes, but they can unleash a hell…