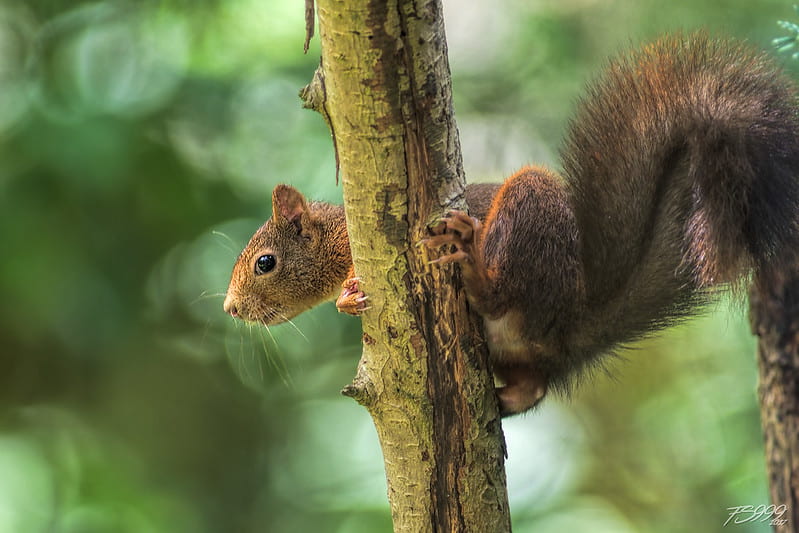 Squirrels are daredevils when it comes to heights, I recently saw an amazing video of a squirrel that jumped into the void of its own volition from a rather tall building, just as amazing was the fact that the squirrel landed alive.

The question arises, can the squirrel survive a fall from any height?

Squirrels can withstand extreme falls and can really hurt themselves, but they survive. Squirrels are a mammal with special physical attributes that help them to fall from any height with minimal damage, due to their lightweight they have very little gravity, They also know how to manipulate their body to create a kind of braking in the air.

In the video I could observe that the squirrel jumped voluntarily, very self-confident, and extended its legs while falling into the void, this action causes a “parachute” effect opposing resistance to the wind while falling, this effect is achieved with its extended legs and its very bushy tail.

In fact, the higher the squirrel falls, the more chances of life it will have because the longer it is falling the more parachute effect is produced, I saw another example of a squirrel that fell from a tree much less high than the building and was hit quite hard but was also unharmed.

In the end, I will post the two videos of squirrel falls that I mention in this topic.

Why do squirrels survive falling from such high distances?

This is basically because the squirrel is an animal with a very light body mass. If I remember anything from my physics classes in college, it is that the weight of all things on earth depends on the specific mass of the object, since the force of gravity on earth is constant.

Apart from this important fact, the other complementary point that helps the squirrel to survive any fall is its great dexterity and physical qualities.

The squirrel has a large tail, which is almost equal to the size of its body, apart from this the tail is quite wide and bushy.

Squirrels can extend their legs increasing the total surface of their body and create a kind of parachute effect which is further enhanced by their fur and the large bushy tail they have.

Finally, when they land, the same muscles in their legs that allow them to make incredible jumps and climb trees in all directions act as shock absorbers capable of absorbing particularly strong impacts.

What is a squirrel’s terminal velocity?

When a body falls, two forces act on it. Gravity and air resistance, which pushes in the opposite direction to the direction of fall.

The air resistance increases in proportion to the velocity of the object and there comes a moment when the body reaches the so-called “terminal velocity”. At that moment, the acceleration equals zero, i.e., the velocity does not increase even if the fall lasts more meters.

According to data collected, the terminal velocity of a squirrel is on average 10.28 m/s, about 23 mph.

The higher the better

I know it sounds counterproductive for us humans, but the higher a squirrel falls, the more likely it is to survive.

Thanks to the parachute effect we were talking about in the previous paragraphs, the terminal velocity in the case of a squirrel is very slow, about 37 km/h compared to the human average of about 193 km/h.

This in itself allows them to have an important survival rate, even in situations where they reach such a speed.

As I explained at the beginning of the topic, a squirrel suffered more damage falling from a tree than from a building, the reason being that the more time the animal is given to jump, the more likely it is to achieve an optimal position to attenuate the impact. Squirrels don’t fall out of trees

In general, however, it can be said that squirrels do not fall from trees. They are incredibly good climbers and jumping from one tree to the next is in their nature.

Anyone who has ever observed a squirrel will have noticed that they are very skilled climbers – regardless of whether they are on tree trunks or house facades – whether with their head up or down – the type of climbing looks very adventurous for us humans.

With its sharp claws that hook into the tree bark, it climbs up tree trunks and along branches with ease. The movements are intermittent and very quick and precise.

The front feet have a short thumb and four long fingers, two of which are pointed up and two down when climbing. So the croissant can move upside down.

The hind feet have five long, strong toes with which the small rodent can easily push off during its daring jumps. The rear feet can also be turned 180 degrees outwards. As they climb down steeply, they turn their rear paws outward and backward. This gives them the necessary support. The Giraffe tongue has surprising and distinctive characteristics, it is a prodigy of evolutionary design. Its shape, color, texture and length are ideal for fulfilling…