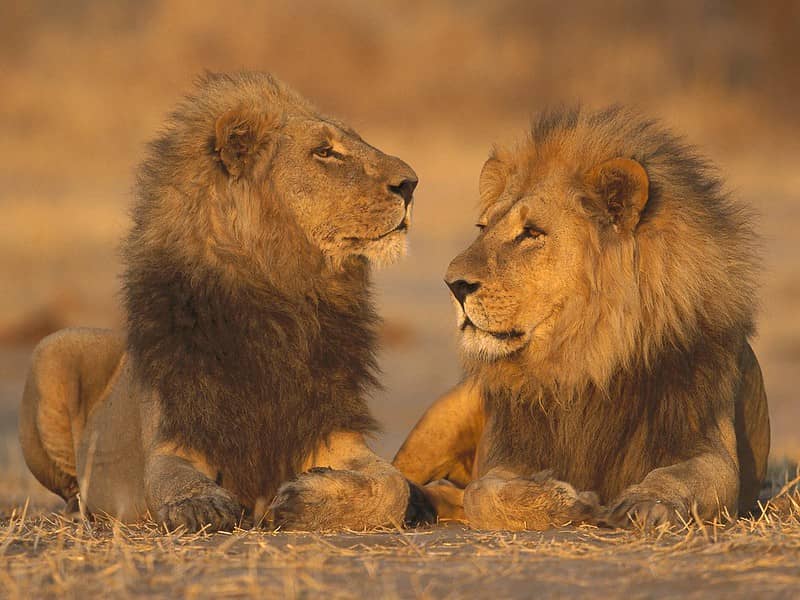 For the purpose of this topic I will have to make a mixture of both concepts, to determine with arguments if they are capable of killing for pure fun.

It would be easy to make a list of animals that have killed human beings, or with apparently strange behavior killing other animals and claim that they are hunting for fun or without any reason.

But for everything, there is a reason and an explanation, that’s why I can say in advance, that there is no such thing as an animal that kills for no reason, although the arguments I’m going to put forward may show the opposite.

Humans are the only animal that kills for fun?

“Humans are the only animal that kills for fun”, that’s a pretty famous and repeated quote.

Certainly, humans have many things to have fun with, movies, internet, sports, but they still hunt animals for sport or satisfaction.

Not to mention serial killers, who kill for pure pleasure and uncontrollable instinct, but these people have profound mental disorders and could not be classified as normal humans, since their brains work differently (with imperfections).

The brain and thinking of human beings is extremely complex, unlike animals, apart from this humans have something that animals do not have, consciousness.

Even though human beings can kill for pleasure or sport, human beings are capable of having consciousness and therefore of being much more pious than animals, well, not always, but they are capable.

Animals, being deprived of consciousness, can be quite cruel, for example, many animals cruelly kill their offspring, both males and females for different purposes.

This, from the point of view of human consciousness, is an aberrant fact, animals do it with different purposes, either reproductive or dominant.

The case of otters killing for fun

Many animals can be extremely ruthless, from the human point of view, an example of which is otters.

Otters, which have a reputation for being gentle and harmless animals, have recently been discovered that in some regions, otters kidnap seal pups to rape them to death.

This apparently cruel behavior occurs in some regions where the male otter population far outnumbers the female and only the dominant otters have access to reproduction.

The strongest and most violent male marks an exclusion zone for the rest of the males, who are confined to a special section for singles.

In addition, mortality among otters seems to have increased, leaving even fewer females among the population.

This seems to have exacerbated the behavior of haremless males, who behave in a very aggressive manner and resort to interspecific sex (with other species). The latter is not so strange.

It has been observed in other animals (including humans), although no one has a satisfactory explanation for this behavior. But aggressiveness, although natural among otters, can be a problem in a small population.

Sea otters are considered to be a threatened species, so any care taken is shortly before they become an endangered species.

But, in reality, otters do not kill and rape seals for fun. In fact, the mating process of otters includes prostrating the female in the water during the act, and because of this, the seal pup dies.

There is no cruelty, viciousness, or pleasure in this sadistic behavior of otters, although our nature humanizes it.

Animals don’t have technology like humans, they don’t have PlayStation or the internet (this was supposed to be a joke), but this doesn’t mean that the only fun in an animal’s life is killing, although killing is definitely an essential part of the survival of animals, even humans.

Whenever an animal kills, there is a reason pure and simple to the survival, these reasons 100% of the cases can be included in:

Not to confuse hunting training for fun, some animals, such as the cat that we will see later in the development of the theme, have to be classified as killing for fun because they “play with their prey”, when in fact what they do is train their hunter’s reflexes for the purpose of their future survival.

These four purposes for which animals kill have one final objective, one word, survival, all living beings even on a microscopic level develop their life stage based on that word.

Animals that kill for no reason or for fun

Among the animals that they kill for no reason or for fun, there is a group that is the most highlighted, of which I will make a list explaining what they do, but I will also expose the possible reason why they do it.

As explained previously, there is a purpose for everything, it’s my turn to play “the devil’s advocate”

Foxes: Foxes are considered authentic serial killers of the animal kingdom, as anyone who has had a chicken coop knows. The fox may go in for a hen but it doesn’t come out without first annihilating the whole henhouse.

Purpose: the fact that the fox kills all the chickens, is not fun, if nobody interferes (the farmer or a guard dog), the fox returns to the henhouse, takes the dead chickens and buries them, as a “food store”.

Orcas: The nickname “killer whale” perfectly describes the essence of the cetacean, which sometimes hunts sea lions or penguins just to train its young in the arts of hunting.

Purpose: As I explained previously, hunting training is vital to the survival of animals.

Lions: It is generally known that male lions practice filicide and kill the cubs of other males to put the females into heat. Apart from this, they kill by strategy cubs of rival species, such as hyenas and cheetahs.

Many researchers of the behavior of these cats, even claim that when there is an abundance of prey they kill for the simple pleasure and fun of killing without even feeding on the rest, as evidenced in the National Geographic documentary “The Last Lioness”.

Purpose: Lions sometimes kill cubs of their own species for reproductive purposes.

Lemurs: “Strategic” infanticide is common in several primate species, but even more shocking in one of its most peaceful ambassadors, the Madagascar lemur, whose male will not hesitate to distract his partner in order to launch his offspring from the tree and guarantee his own hereditary line.

Dolphins: The most intelligent, sociable and sensitive animal in the seas is also capable of organizing itself into gangs in order to beat up and kill other marine mammals, such as porpoises or even rival groups of the same species, as has been observed by marine biologists in Scottish waters. Perhaps we are not only related to the dolphin by its proven intelligence.

So there are many other examples, all framed in the purposes mentioned above, there are cases of some predators that kill large numbers of animals without consuming them in their entirety.

This is called “Surplus killing”, it is a practice of some predators that kill many preys at the same time and only eat their favorite part or the part that provides them with more nutrients.