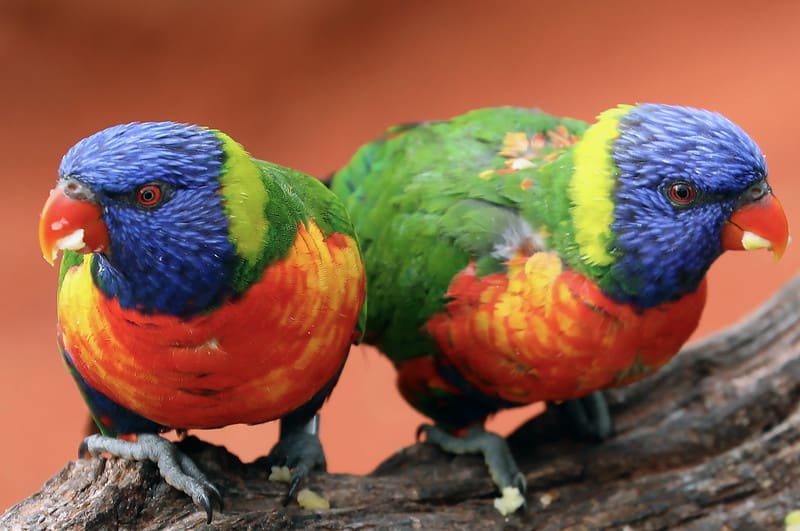 The lovebirds do make noise if you understand it as vocalizations and chirps. The noise level may be quite high, particularly if the birdcage is in a small room.

Like many other small pet birds like parakeets or cockatiels, the lovebird is not a silent animal. For most of the day, they will be making sounds, particularly when they are happy, but they can also make sounds when they are scared, nervous or anxious.

Let’s say that in terms of noise the lovebirds are more or less in the middle compared to the other birds previously mentioned. They are not super silent, but neither are they particularly noisy birds. If they are excited, scared, or careless, they make a high-pitched whistle.

Lovebirds are not considered to be songbirds as might be the goldfinch or the canary, as these passerines have a much more developed vocal apparatus.

In nature, wild lovebirds live in large flocks of birds that move in unison. Sounds are very important to them, since they use their trills to warn their companions of the presence of a predator, and also to let them know that the flock will take off immediately and they must prepare to leave

Do lovebirds make noise at night?

Usually, the lovebirds do not make noise at night, since it is a bird that sleeps at night, in addition, they are silent at night as a natural habit, since at night, in nature they can be a prey of predators.

The agapornis sleep on a perch and every night they need 10 hours of rest, with their cage in an environment of total darkness and silence. Some specimens may prefer to sleep clinging to the bars of their cage, especially those at the top.

During their hours of rest, you should not turn on the lights in the room or leave the TV on, or any other noise or music that may disturb them.

The lovebirds are light sleepers. They are animals that in nature serve as prey to various species of carnivores, so they wake up easily to any noise.

If you interrupt your lovebirds sleep at night by turning on the light or making noises, you can cause behavioral problems for your bird, such as nervousness and irritability, and it can even become more aggressive and make noise.

If you pass by his cage and notice that he has opened his eyes, this is a clear sign that you have awakened him and disturbed his sleep. Therefore, leave the cage of your lovebird in a quiet room, where you don’t have to pass by or turn on the light during its sleeping hours.

Because of its loud and friendly nature it has to be said that lovebirds like music. They love to be accompanied by all kinds of different sounds, so if you play songs for them, it’s quite normal for them to be excited and even to dance, performing funny head movements.

You must keep in mind not to play too loud music, so as not to stress your lovebird, the ideal is soft, relaxing music or classical music with a good rhythm, very loud or strident sounds could cause stress instead of making him happy.

The lovebirds makes noises before sleeping

That the lovebird makes small noises before sleeping is common in some small parrots, so do some parakeets. Just before falling asleep, they gurgle, chirp and make little noises, while their eyes narrow.

If yours does, turn off the lights, because it’s their bedtime. You will see that when he turns off the light, he stops making little noises and falls asleep.

How to stop your lovebird from screaming?

The lovebirds as a highly sociable bird can be trained to moderate noise, more than a momentary action, it is a habit that you must instill in it through actions and elements, you must discipline the bird, these are some elements to teach your bird not to make so much noise:

Avoid rewarding him to shut him up: You should not pay attention to him when he makes noise. This includes not scolding him, because the animal considers it an answer to his call. When he stops making sounds for a few seconds, you should reward him.

I know cases of some owners of lovebirds that to silence them, it gives them anything to peck at, this can work momentarily, but what you are really doing is badly accustoming the lovebirds, every time it needs attention you will be badly accustomed to screaming.

Educate him to be quiet: Thanks to the intelligence of the lovebirds, they can identify the tones. When you interact with your feathered partner, you should always speak softly. Congratulate him and reward him when he responds with soft tones. This way he will understand that it is useless to shout to get your attention.

Darkness at night: Birds do not sing at night, because if they call the attention of predators, they do not see in order to escape. So that your pet does not bother you to sleep at night or in the morning, simply pull down the blinds so that the light does not enter.

You shouldn’t use this trick during the day, you can’t plunge the animal into darkness all day, simply because you are bothered by its sound.

Avoid disturbances and scares: So that the lovebirds do not start to scream, keep their environment calm. Do not make sudden movements near him, neither should anyone run or scream.

Avoid noise: Do not play loud music or television. If the environment is quiet, the lovebirds will be quieter.

Place your cage where it won’t be disturbed: Look for a room in the house that is well ventilated and lit. It is good that a part of the cage gets the sun. But you should also have a shaded area where you can take shelter if it is very hot.

Avoid draughts in winter and extreme heat in summer. If you are near a window, check that it does not give you the air directly.

The best rooms in the house are the living room and the dining room, where family activities take place and the cockatiel does not feel so alone.

A kitchen is a common place, but nothing recommended for birds, because the gases, vapors and fats are very dangerous for such a small bird. The corridor is not a good choice either, as it is a place of transit, you go from absolute solitude to shock when someone leaves a room or slams a door.

Occasionally, birds will make noises to attract other birds because they are feeling sad and lonely. If in nature, the bird lives in a flock, you have to interact with the bird as much as possible.

Pay attention to him: Let him out of his cage, scratch his head if he likes it, and distract him for a few hours a day.

Give him toys to entertain himself: Bird toys will help him be entertained. You should change them from time to time if they are broken or not paid attention to.

Chew toys: These are toys that birds can handle with their beaks. They are the usual toys made of wood, which are hung in the cage. They are destined to be destroyed by the animal, so they must be adapted to its size. A toy that is too resistant will end up making it lose interest and would need to be changed in a short time.

Swings: Many birds like to be hung from the sites. If you provide them with a swing, they will spend time swinging. If you add a bell that they can ring, the fun will be greater.

Activity park: This is a kind of gymnasium for birds. These parks contain swings, stairs, platforms and a multitude of objects with which your bird can have fun as well as exercise. In addition, it will stimulate your intelligence and avoid stress problems.

Show him he’s not alone: One of the best practices you can do to help your lovebirds not get too stressed is to say goodbye to them when you leave the house.

Tell it where you’re going and when you’re coming back so that in time it understands that you’re not leaving forever. When you return home, if you want, you can let him know it’s you.

If he’s in another room and doesn’t see you when you arrive, he won’t know who or what is making the noise if you don’t say anything. Many people who have pet birds including budgies, lovebirds, cockatiels, canaries, etc, find very creative uses for toilet paper rolls in their bird cages, Many times…