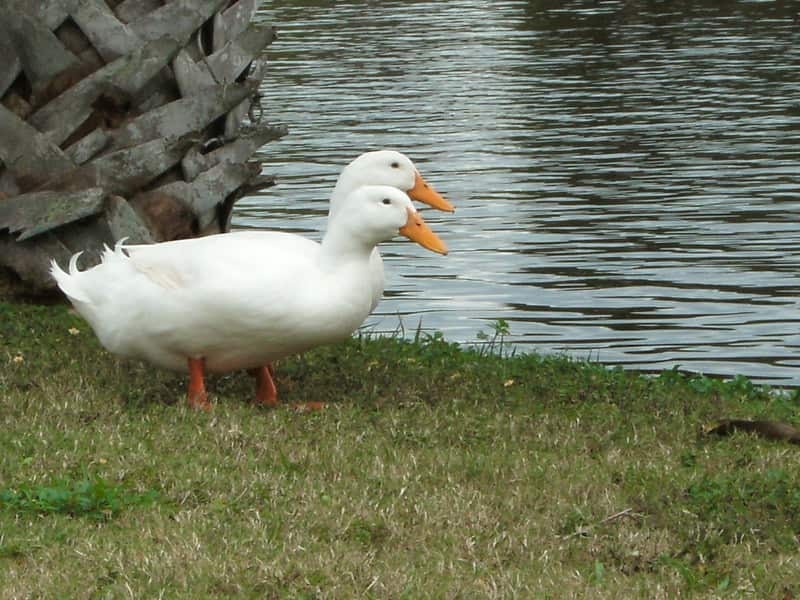 So after this long introduction (yes, the topic has just begun) let’s elaborate on each of these factors to find out if a Peking duck could survive in the wild.

I dare say that the Peking duck is the most popular domesticated duck, not only in North America, but all over the world, and is highly valued for both its meat and egg production.

Domestic ducks, such as the Peking duck, were originally imported from China to Europe and in North America around 1800 A.D., first seen at exhibitions in 1878.

One of the most widely used breeds of domestic duck is the Peking duck. It has been used historically as a meat-producing bird, even before the domestic fowl.

So, being a domesticated, friendly and calm duck, many people wonder if this duck can survive on its own in the wild, perhaps if you have a pet Pekin duck and this duck has escaped from your farm to freedom.

Or simply, if you want to leave the Pekin ducks in an environment where they are as close as possible to living in nature and you have doubts whether they can survive on their own.

Keep in mind, that there are different kinds of Peking ducks, also that some ducks can be confused with the Peking duck because they have almost the same characteristics and features.

Despite being a domesticated and calm duck, the Pekin duck is quite robust and resistant, it can survive in extreme conditions, it is not a fragile duck compared to other duck species. What could really determine the life chances of a Peking duck in the wild is the number of predators in its environment.

There are several factors that determine whether a Peking duck can survive on its own in the wild, but three essential ones stand out:

The fact that the Pekin duck cannot fly puts me in “checkmate” regarding its chances of survival in the wild, any close encounter with a predator will be 100% lost.

The Pekin duck has no other defense mechanism, perhaps once upon a time thousands of years ago the Pekin duck or its ancestor ducks could fly, but the Pekin duck today is very heavy and its wing muscles are underdeveloped.

It could barely jump and flap its wings, flying is the best defense mechanism of birds against any land predator, usually, predators of ducks on the ground are very agile and fast animals, such as the coyote.

Some examples of wild ducks such as the Mallard or Muscovy duck that can fly are very different in size as they are much lighter and smaller, as well as in color, which is more adapted to camouflage.

The survival success of these wild ducks is their ability to fly since they not only use it as a quick escape mechanism from predators, but they can also move with ease in search of food.

Although during the research of this topic I came across some videos of some domestic ducks flying, including Pekin ducks, I remind you, as I mentioned previously, that there are different species of Pekin ducks.

Some of these species even confuse them, an example, American Pekin duck, which was imported to the United States, was originally crossed with the Aylesbury duck, this other duck confused with the Peking duck, that cross was made in order to achieve more weight.

This duck, which has to be much heavier and with more fat, and which walks in a funny way, is very unlikely to be able to fly, even a few meters.

As previously mentioned, the Pekin duck is extremely resistant to severe weather conditions, this is one of its strong points.

It has always amazed me how resilient an adult Peking duck can be in extreme winter weather conditions. Ducks have the ability to regulate the temperature in their legs based on the heat exchanger technique so they don’t freeze.

For a Pekin duck, it will not be difficult to survive the winter weather, this is because its body is adapted with several defense mechanisms that protect it from the cold, from its legs to its feathers.

Of course, this does not mean that they should be exposed to extreme climates, ideally, in winter they will need a shelter that protects them from the freezing wind and with a vegetal surface where they can isolate themselves a little from the freezing ground.

Also, a source of food, because in winter food is scarce, ducks usually migrate to other places in search of food in winter, but a Peking duck is not a migratory bird because it cannot fly long distances.

What could a Peking duck eat in the wild?

Food would be one of the least of the concerns for a Peking duck in the wild, although in domestic conditions these ducks are supplemented with food, in the wild these ducks would be accustomed to eating practically anything within reach of their beaks.

Well, anything edible, but in reality, their range of options is so wide that it would not be a problem for a Peking duck to find food, usually a Peking duck wandering around a farm eats many things it finds in its environment.

Wild ducks can eat a wide variety of plants, insects, fish, algae, seeds, they have a special ability to search and find food with their beak.

When can you let ducks go?

If you want to let your duck go free in the wild, you need to make sure of a few factors so that the duck can be successful in the wild

Foraging: if you have had the duck since it was a baby and you have made sure to provide it with all its food, it is necessary that, once it eats on its own, you help it learn to forage for its own food and water through strategies and games.

Generally, ducks have no problems in this regard, as they are capable and skillful when it comes to finding their own food.

Provide the food directly on the floor, so that the duck gets used to not using containers to eat, as well as putting the food in places where the duck has to look for it.

Safe from predators: Ideally, the duck should be able to fly, but in the case of Peking ducks this may be very unlikely, so be sure to leave the duck in a large enough area that is not plagued by predators.

Yes, this may be a little difficult to investigate, but there are some areas that are safer than others, you can be guided by observing the type of animals you see in the environment, such as other birds.

A place with a large pond of water is also ideal, not only will it be a plentiful supply of food for the duck, but the water serves as a defensive barrier against terrestrial predators.

You should also ensure that the duck is in good shape, good health and adequate plumage.

The appropriate time: The ideal time is in spring or summer since it is easier to find food and the weather is milder.

Check the climate forecast, and avoid the days before heavy storms; and never on holidays when fireworks use is common, since they are very stressful and frightening for them.

The early hours of the day should be preferred, preferably in the morning, and after eating, so that they have many hours of light to orient themselves and begin their adaptation. If there is one thing geese have plenty of, it is courage, have you seen how they attack people without backing down? they seem to…